Thank you to Paisley Boiler Installations (Gas Engineers, Central Heating Installations & New Boilers throughout Paisley & Glasgow) for becoming our first funding donor. We are nearing the end of the term and work has been going well we have recruited a number of test subjects who will sit through the various tests with us and all of the tests and any related rigs have been designed and many are almost built and ready to start testing. I would like to thank Professor Rough for the guidance and my colleagues for all the long hours we have been putting in in the evenings after lectures.

Its an added bonus that Paisley Boiler Installations will be helping us with the construction of two of our test rigs which need to use a number of thermostats with different temperature water baths to test human perception in the physical domain and automatic response testing. We could have use thermometers and kept filling things up with hot water from the tap but James from the company offered a very useful boiler that they have for temporary use in houses while larger works are being carried out. It is a potable electric combi-boiler. Its pretty small and we just need to plug it in in the lab and ad a thermostat and it works its self! Very nifty. It certainly makes things easier!! We can concentrate on the tests and questioning rather that constantly running back and forward with jugs of hot water. 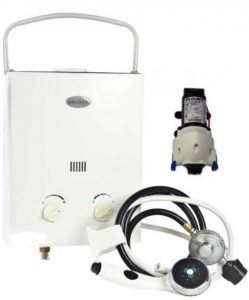 This is the water heater lent to us from Paisley Boiler Installations. Thanks!

With the temperature dropping and the snow probably on the way we won’t be carrying out any outside tests. Everything will take place between the labs in the psychology department and the small lecture theater in Unit 2 of the Boyd Orr Building. For the next few weeks we will be having to spend only evenings on the project rig building as most of our time will have to be spent studying for the mid term exams. Soon after the exams we should be in a position to start with testing on some of the tests that are ready.

Our guinneapigs (Sorry. I mean test subjects!) will be provided with tea coffee and biscuits to compensate them for their troubles.